How it All Began

GetOrdained.com began back in 1999 when a couple of Christians got together and shared their frustration that the churches they were members of were making getting ordained as a minister a game of jumping through unnecessary hoops. What these Christians realized by comparing stories is that churches were making multiple layers of requirements to go through “courses” put on by the senior pastor to judge them in ways that weren’t making sense. They agreed that there needed to be a service to everyone who desired to be ordained to do so, without pre-conditions. And that began the GetOrdained.com organization.

By 2001, there were more than 800 member clergy ordained through GetOrdained.com and the decision was made to start a church organization with training and other services to establish a “home” church for the ordained ministers. This is how Street Bishops International Ministries came to be. At that time, and up until 911, we ordained folks from around the world. There were as many ministers internationally as domestic to the United States. The ministers of Street Bishops began to ask for training and it began at first by email. Then with the explosive growth of YouTube, the trainings went video. After 911, ordination to non-US or non-Canadians was restricted to special cases only. But we continued to grow.

GetOrdained.com continues to ordain ministers and assist them in starting their ministries across the nation. We began assisting with establishing 501(c)3 IRS tax status as well as developing complete ministry plans. Now with more than 5,000 ministers, Street Bishops is one of the largest independent religious organizations in number of clergy in the nation. And to this day, we do not tell ministers what to believe nor what ministries to engage in. We are open and free and ask folks just to follow their heart through prayer and guidance from the Holy Spirit.

Since 2019, the GetOrdained.com headquarters is located in Ormond Beach, Florida.

When you get ordained, you will receive an awesome wedding handbook even before your certificate arrives in the mail. 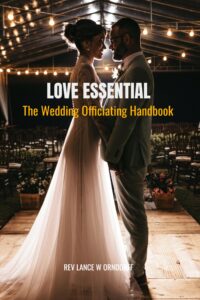 This COMPLETE handbook will take you from beginner minister to experienced wedding officiant. You get it FREE with your ordination. 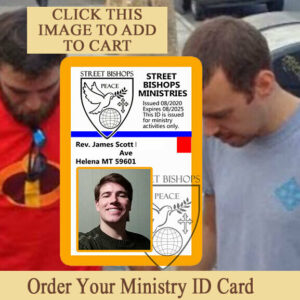 Many ministers need photo identification when in prisons and hospitals. You can order yours here.